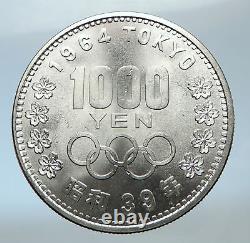 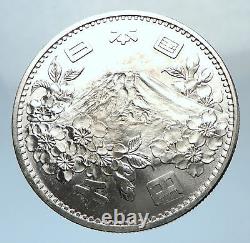 Fuji with cherry blossoms, (Translation: State of Japan 1000 yen) around. With Olympic logo rings at center.

Mount Fuji's exceptionally symmetrical cone, which is snow-capped for about 5 months a year, is a well-known symbol of Japan and it is frequently depicted in art and photographs, as well as visited by sightseers and climbers. Mount Fuji is one of Japan's "Three Holy Mountains" (Sanreizan) along with Mount Tate and Mount Haku. It is also a Special Place of Scenic Beauty and one of Japan's Historic Sites.

It was added to the World Heritage List as a Cultural Site on June 22, 2013. According to UNESCO, Mount Fuji has "inspired artists and poets and been the object of pilgrimage for centuries".

UNESCO recognizes 25 sites of cultural interest within the Mount Fuji locality. These 25 locations include the mountain and the Shinto shrine, Fujisan Hong Sengen Taisha, as well as the Buddhist Taisekiji Head Temple founded in 1290, later immortalized by Japanese ukiyo-e artist Katsushika Hokusai. The 1964 Summer Olympics , officially known as the Games of the XVIII Olympiad (Japanese: Hepburn: Dai Jhachi-kai Orinpikku Kygi Taikai), was an international multi-sport event held in Tokyo, Japan, from 10 to 24 October 1964. Tokyo had been awarded the organization of the 1940 Summer Olympics, but this honour was subsequently passed to Helsinki because of Japan's invasion of China, before ultimately being cancelled because of World War II. The 1964 Summer Games were the first Olympics held in Asia, and the first time South Africa was barred from taking part due to its apartheid system in sports. South Africa was, however, allowed to compete at the 1964 Summer Paralympics, also held in Tokyo, where it made its Paralympic Games debut. Tokyo was chosen as the host city during the 55th IOC Session in West Germany, on 26 May 1959. These games were also the first to be telecast internationally without the need for tapes to be flown overseas, as they had been for the 1960 Olympics four years earlier. The games were telecast to the United States using Syncom 3, the first geostationary communication satellite, and from there to Europe using Relay 1. These were also the first Olympic Games to have color telecasts, albeit partially. Certain events like the sumo wrestling and judo matches, sports huge in Japan, were tried out using Toshiba's new colour transmission system, but only for the domestic market. History surrounding the 1964 Olympics was chronicled in the 1965 documentary film Tokyo Olympiad , directed by Kon Ichikawa.

The games were scheduled for mid-October to avoid the city's midsummer heat and humidity and the September typhoon season. The previous Olympics in Rome in 1960 started in late August and experienced hot weather.

The following games in 1968 in Mexico City also began in October. The 1960's Olympics were also the last to use a traditional cinder track for the track events.

A smooth, synthetic, all-weather track was used for the first time at the 1968 Olympics and at every Olympiad thereafter. April 29, 1901 - January 7, 1989 was the 124th Emperor of Japan according to the traditional order of succession, reigning from December 25, 1926, until his death on January 7, 1989. He was succeeded by his eldest son, Akihito, upon his death. Although better known outside Japan by his personal name Hirohito. , in Japan, he is now referred to primarily by his posthumous name Emperor Shwa.

The word Shwa is the name of the era that corresponded with the Emperor's reign, and was made the Emperor's own name upon his death. The name Hirohito means "abundant benevolence". At the start of his reign, Japan was already one of the great powers - the ninth-largest economy in the world, the third-largest naval power, and one of the four permanent members of the council of the League of Nations. He was the head of state under the Constitution of the Empire of Japan during Japan's imperial expansion, militarization, and involvement in World War II. After the war, he was not prosecuted for war crimes as many other leading government figures were, and his degree of involvement in wartime decisions remains controversial among historians. During the post-war period, he became the symbol of the new state and Japan's recovery, and by the end of his reign, Japan had emerged as the world's second largest economy. Japan is an island nation in East Asia. Located in the Pacific Ocean, it lies to the east of the Sea of Japan, China, North Korea, South Korea and Russia, stretching from the Sea of Okhotsk in the north to the East China Sea and Taiwan in the south. The characters that make up Japan's name mean "sun-origin", which is why Japan is often referred to as the "Land of the Rising Sun".

Japan is a stratovolcanic archipelago of 6,852 islands. The four largest islands are Honshu, Hokkaido, Kyushu, and Shikoku, which together comprise about ninety-seven percent of Japan's land area. Japan has the world's tenth-largest population, with over 126 million people. Honsh's Greater Tokyo Area, which includes the de facto capital of Tokyo and several surrounding prefectures, is the largest metropolitan area in the world, with over 30 million residents. Archaeological research indicates that people lived in Japan as early as the Upper Paleolithic period.

The first written mention of Japan is in Chinese history texts from the 1st century AD. Influence from other regions, mainly China, followed by periods of isolation, particularly from Western European influence, has characterized Japan's history. From the 12th century until 1868, Japan was ruled by successive feudal military shoguns in the name of the Emperor. Japan entered into a long period of isolation in the early 17th century, which was only ended in 1853 when a United States fleet pressured Japan to open to the West. Nearly two decades of internal conflict and insurrection followed before the Meiji Emperor was restored as head of state in 1868 and the Empire of Japan was proclaimed, with the Emperor as a divine symbol of the nation.

In the late 19th and early 20th centuries, victories in the First Sino-Japanese War, the Russo-Japanese War and World War I allowed Japan to expand its empire during a period of increasing militarism. The Second Sino-Japanese War of 1937 expanded into part of World War II in 1941, which came to an end in 1945 following the atomic bombings of Hiroshima and Nagasaki. Since adopting its revised constitution in 1947, Japan has maintained a unitary constitutional monarchy with an emperor and an elected legislature called the Diet. A major economic power, Japan is a developed country and has the world's third-largest economy by nominal GDP and the world's fourth-largest economy by purchasing power parity. It is also the world's fourth-largest exporter and fourth-largest importer.

Although Japan has officially renounced its right to declare war, it maintains a modern military with the world's eighth largest military budget, used for self-defense and peacekeeping roles. Japan ranks high in metrics of prosperity such as the Human Development Index, with the Japanese population enjoying the highest life expectancy of any country in the world and the infant mortality rate being the third lowest globally. World-renowned expert numismatist, enthusiast, author and dealer in authentic ancient Greek, ancient Roman, ancient Byzantine, world coins & more.

How and where do I learn more about collecting ancient coins? Visit the Guide on How to Use My Store. For on an overview about using my store, with additional information and links to all other parts of my store which may include educational information on topics you are looking for. The item "1964 JAPAN Tokyo Summer Olympic Games 3.5cm Silver Japanese MT FUJI Coin i73772" is in sale since Tuesday, January 1, 2019.

This item is in the category "Coins & Paper Money\Coins\ World\Asia\Japan". The seller is "highrating_lowprice" and is located in Rego Park, New York.