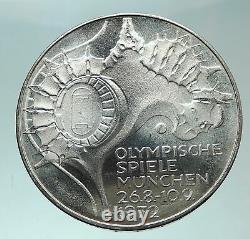 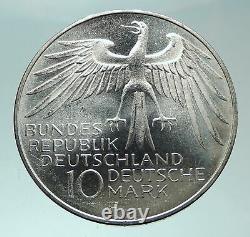 Situated at the heart of the Olympiapark München in northern Munich, the stadium was built as the main venue for the 1972 Summer Olympics. With an original capacity of 80,000, the stadium also hosted many major football matches including the 1974 World Cup Final and the Euro'88 Final.

The 1972 Summer Olympics (German: Olympische Sommerspiele 1972), officially known as the Games of the XX Olympiad , was an international multi-sport event held in Munich , West Germany , from August 26 to September 11, 1972. The sporting nature of the event was largely overshadowed by the Munich massacre in which eleven Israeli athletes and coaches and a West German police officer were killed.

Five Black September Palestinian terrorists died. The 1972 Summer Olympics were the second Summer Olympics to be held in Germany, after the 1936 Games in Berlin , which had taken place under the Nazi regime. Mindful of the connection, the West German Government was eager to take the opportunity of the Munich Olympics to present a new, democratic and optimistic Germany to the world, as shown by the Games' official motto, "Die Heiteren Spiele", or "the cheerful Games".

The logo of the Games was a blue solar logo (the "Bright Sun") by Otl Aicher , the designer and director of the visual conception commission. The Olympic mascot, the dachshund "Waldi", was the first officially named Olympic mascot.

The Olympic Fanfare was composed by Herbert Rehbein , a companion of Bert Kaempfert. The Olympic Park (Olympiapark) is based on Frei Otto's plans and after the Games became a Munich landmark.

The competition sites, designed by architect Günther Behnisch , included the Olympic swimming hall, the Olympics Hall (Olympiahalle , a multipurpose facility) and the Olympic Stadium (Olympiastadion), and an Olympic village very close to the park. The design of the stadium was considered revolutionary, with sweeping canopies of acrylic glass stabilized by metal ropes, used on such a large scale for the first time.

Germany , officially the Federal Republic of Germany is a federal parliamentary republic in western -central Europe. It includes 16 constituent states and covers an area of 357,021 square kilometres (137,847 sq mi) with a largely temperate seasonal climate. Its capital and largest city is Berlin. With 81 million inhabitants, Germany is the most populous member state in the European Union. After the United States, it is the second most popular migration destination in the world. Various Germanic tribes have occupied northern Germany since classical antiquity. A region named Germania was documented before 100 CE. During the Migration Period the Germanic tribes expanded southward. Beginning in the 10th century, German territories formed a central part of the Holy Roman Empire. During the 16th century, northern German regions became the centre of the Protestant Reformation. The rise of Pan-Germanism inside the German Confederation resulted in the unification of most of the German states in 1871 into the Prussian -dominated German Empire. The establishment of the Third Reich in 1933 led to World War II and the Holocaust. After 1945, Germany split into two states, East Germany and West Germany. In 1990 , the country was reunified. In the 21st century, Germany is a great power and has the world's fourth-largest economy by nominal GDP , as well as the fifth-largest by PPP. As a global leader in several industrial and technological sectors, it is both the world's third-largest exporter and importer of goods. Germany is a developed country with a very high standard of living sustained by a skilled and productive society. It upholds a social security and universal health care system, environmental protection and a tuition free university education. Germany was a founding member of the European Union in 1993. It is part of the Schengen Area , and became a co-founder of the Eurozone in 1999. Germany is a member of the United Nations , NATO, the G8 , the G20 , and the OECD. The national military expenditure is the 9th highest in the world. Known for its rich cultural history, Germany has been continuously the home of influential artists , philosophers , musicians , sportsmen , entrepreneurs , scientists and inventors. World-renowned expert numismatist, enthusiast, author and dealer in authentic ancient Greek, ancient Roman, ancient Byzantine, world coins & more.

How and where do I learn more about collecting ancient coins? Visit the Guide on How to Use My Store. For on an overview about using my store, with additional information and links to all other parts of my store which may include educational information on topics you are looking for. The item "1972 Germany Munich Summer Olympics Stadium Genuine 10 Mark Silver Coin i82403" is in sale since Wednesday, January 29, 2020.

This item is in the category "Coins & Paper Money\Coins\ World\Europe\Germany\West & Unified (1949-Now)". The seller is "highrating_lowprice" and is located in Rego Park, New York.