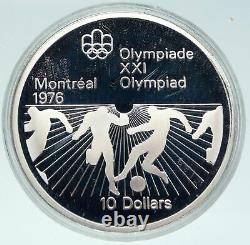 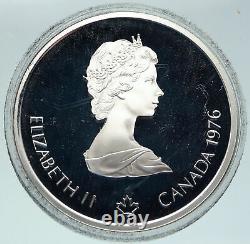 OLYMPIADE XXI OLYMPIAD MONTREAL 1976 10 DOLLARS, Football (soccer) players silhouetted, sun behind, ball below. The 1976 Summer Olympics , officially called the Games of the XXI Olympiad (French: Les XXIes olympiques d'été), was an international multi-sport event in Montreal, Quebec, in 1976, and the first Olympic Games held in Canada. It was the first and, so far, only Summer Olympic Games to be held in Canada.

Calgary and Vancouver later hosted the Winter Olympic Games in 1988 and 2010, respectively. Twenty-nine countries, mostly African, boycotted the Montreal Games when the International Olympic Committee (IOC) refused to ban New Zealand, after the New Zealand national rugby union team had toured South Africa earlier in 1976 in defiance of the United Nations' calls for a sporting embargo. The vote occurred on May 12, 1970, at the 69th IOC Session in Amsterdam, Netherlands. While Los Angeles and Moscow were viewed as the favourites given that they represented the world's two main powers, many of the smaller countries supported Montreal as an underdog and as a relatively neutral site for the games. Los Angeles was eliminated after the first round and Montreal won in the second round.

Moscow would go on to host the 1980 Summer Olympics and Los Angeles the 1984 Summer Olympics. One blank vote was cast in the second and final round. Toronto had made its third attempt for the Olympics but failed to get the support of the Canadian Olympic Committee, which selected Montreal instead. Robert Bourassa, then the Premier of Quebec, first asked Prime Minister Pierre Trudeau to advise Canada's monarch, Elizabeth II, to attend the opening of the games. However, Bourassa later became unsettled about how unpopular the move might be with sovereigntists in the province, annoying Trudeau, who had already made arrangements.

The leader of the Parti Québécois at the time, René Lévesque, sent his own letter to Buckingham Palace, asking the Queen to refuse her prime minister's request, though she did not oblige Lévesque as he was out of his jurisdiction in offering advice to the Sovereign. In 1976, Trudeau, succumbing to pressure from the Communist Chinese, issued an order barring Taiwan from participating as China in the 1976 Montreal Olympics, although technically it was a matter for the IOC. His action strained relations with the United States - from President Ford, future President Carter and the press. The Oxford Olympics Study estimates the outturn cost of the Montreal 1976 Summer Olympics at USD 6.1 billion in 2015-dollars and cost overrun at 720% in real terms. This includes sports-related costs only, that is, (i) operational costs incurred by the organizing committee for the purpose of staging the Games, e.

Expenditures for technology, transportation, workforce, administration, security, catering, ceremonies, and medical services, and (ii) direct capital costs incurred by the host city and country or private investors to build, e. The competition venues, the Olympic village, international broadcast center, and media and press center, which are required to host the Games.

Indirect capital costs are not included, such as for road, rail, or airport infrastructure, or for hotel upgrades or other business investment incurred in preparation for the Games but not directly related to staging the Games. The cost overrun for Montreal 1976 is the highest cost overrun on record for any Olympics. The cost and cost overrun for Montreal 1976 compares with costs of USD 4.6 billion and a cost overrun of 51% for Rio 2016 and USD 15 billion and 76% for London 2012. Average cost for the Summer Games from 1960 to 2016 is 5.2 billion 2015 US dollars, average cost overrun is 176%. Much of the cost overruns were caused by the Conseil des métiers de la construction union whose leader was André "Dede" Desjardins, and who kept the construction site in "anarchic disorder" as part of a shakedown.

Taillibert wrote in Notre Cher Stade Olympique If the Olympic Games took place, it was thanks to Dede Desjardins. Canada is a country, consisting of ten provinces and three territories, in the northern part of the continent of North America. It extends from the Atlantic to the Pacific and northward into the Arctic Ocean, covering 9.98 million square kilometres (3.85 million square miles) in total, making it the world's second-largest country by total area and the fourth-largest country by land area. Canada's common border with the United States forms the world's longest land border. Canada is sparsely populated overall, the majority of its land territory being dominated by forest and tundra as well as the mountain range of the Rocky Mountains; about four-fifths of the population live near to the southern border.

The majority of Canada has a cold or severely cold winter climate, but southerly areas are warm in summer. The land now called Canada has been inhabited for millennia by various Aboriginal peoples. Beginning in the late 15th century, British and French colonies were established on the region's Atlantic coast.

As a consequence of various conflicts, the United Kingdom gained and lost North American territories until left, in the late 18th century, with what mostly comprises Canada today. Pursuant to the British North America Act, on July 1, 1867, three colonies joined to form the autonomous federal Dominion of Canada. This began an accretion of provinces and territories to the new self-governing Dominion.

In 1931, Britain granted Canada near total independence with the Statute of Westminster 1931 and full sovereignty was attained when the Canada Act 1982 severed the vestiges of legal dependence on the British parliament. Canada is a federal parliamentary democracy and a constitutional monarchy, Queen Elizabeth II being the current head of state. The country is officially bilingual at the federal level. It is one of the world's most ethnically diverse and multicultural nations, the product of large-scale immigration from many countries, with a population of approximately 35 million as of 2015. Its advanced economy is the eleventh largest in the world, relying chiefly upon its abundant natural resources and well-developed international trade networks.

Canada's long and complex relationship with the United States has had a significant impact on its economy and culture. Canada is a developed country and one of the wealthiest in the world, with the tenth highest nominal per capita income globally, and the eighth highest ranking in the Human Development Index. It ranks among the highest in international measurements of government transparency, civil liberties, quality of life, economic freedom, and education. Canada is a Commonwealth Realm member of the Commonwealth of Nations, a member of the Francophonie, and part of several major international and intergovernmental institutions or groupings including the North Atlantic Treaty Organization, the G8, the Group of Ten, the G20, the North American Free Trade Agreement and the Asia-Pacific Economic Cooperation forum. World-renowned expert numismatist, enthusiast, author and dealer in authentic ancient Greek, ancient Roman, ancient Byzantine, world coins & more. Ilya Zlobin is an independent individual who has a passion for coin collecting, research and understanding the importance of the historical context and significance all coins and objects represent. Send me a message about this and I can update your invoice should you want this method. Getting your order to you, quickly and securely is a top priority and is taken seriously here. Great care is taken in packaging and mailing every item securely and quickly. What is a certificate of authenticity and what guarantees do you give that the item is authentic? You will be very happy with what you get with the COA; a professional presentation of the coin, with all of the relevant information and a picture of the coin you saw in the listing. Additionally, the coin is inside it's own protective coin flip (holder), with a 2x2 inch description of the coin matching the individual number on the COA. Whether your goal is to collect or give the item as a gift, coins presented like this could be more prized and valued higher than items that were not given such care and attention to. When should I leave feedback? Please don't leave any negative feedbacks, as it happens sometimes that people rush to leave feedback before letting sufficient time for their order to arrive. The matter of fact is that any issues can be resolved, as reputation is most important to me. My goal is to provide superior products and quality of service. How and where do I learn more about collecting ancient coins? Visit the Guide on How to Use My Store. For on an overview about using my store, with additional information and links to all other parts of my store which may include educational information on topics you are looking for. The item "1976 CANADA Elizabeth II Olympics Montreal FOOTBALL Proof Silver 10 Coin i86312" is in sale since Tuesday, September 22, 2020.

This item is in the category "Coins & Paper Money\Coins\ Canada\Other Canadian Coins". The seller is "highrating_lowprice" and is located in Rego Park, New York.