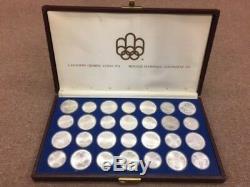 Most numismatists agree that the first true numismatic collection was the Olympic Five and Ten Dollar coins for the 1976 Montreal Olympics. Starting in February 1973, the Royal Canadian Mint (RCM) engaged in a very ambitious program.

At the behest of the federal government, led by then-Prime Minister Pierre Elliott Trudeau, it was agreed that these coins would help finance and commemorate the 1976 Summer Olympics. These coins would be categorized into seven series with each series configured into four coin sets (two five dollar coins and two ten dollar coins). The seven series were constituted as follows. Olympic Track and Field Sports.