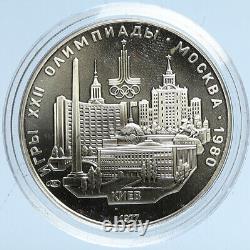 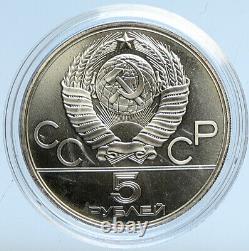 Item: i113074 Authentic Coin of. Union of Soviet Socialist Republics 1980 Summer Olympics in Moscow Commemorative 1977 BU Silver 5 Roubles 33mm (16.67 grams) 0.900 Silver 0.4793 oz. National coat of arms (hammer and sickle) in front of the globe underneath the soviet star and above the rising sun surrounded by barley ears bond with ribbons. The 1980 Summer Olympics, officially known as the Games of the XXII Olympiad Russian:?

Led by the United States at the insistence of US President Jimmy Carter, 66 countries boycotted the games entirely because of the Soviet invasion of Afghanistan. Some athletes from some of the boycotting countries (they are not included in the list of 66 countries that boycotted the games entirely) participated in the games under the Olympic Flag. This prompted the Soviet-led boycott of the 1984 Summer Olympics. Sailing event was held in Tallinn, Estonia which was at the time one of the Soviet republics.

Soviet sailor Valentyn Mankin won a gold medal in "Star" class. He won Olympic champion titles in "Finn" and "Tempest" classes before, and as of 2007 remains the only sailor in Olympic history to win gold medals in three different classes.

Finland (gold) won its first gold Olympic yachting medal and Ireland (silver) won its first ever Olympic yachting medal. The USSR had its worst Olympic regatta since Mexico City 1968. In 1980, the medals were awarded to yachtsmen from twelve countries, the widest medal distribution in the sport at an Olympics. The Union of Soviet Socialist Republics USSR, Russian:???? Soyuz Sovetskikh Sotsialisticheskikh Respublik, abbreviated????

SSSR , also known as the Soviet Union????????? , was a constitutionally socialist state that existed on the territory of most of the former Russian Empire in Eurasia between 1922 and 1991.

The European western part of the country is much more populated and urbanised than the eastern; about 77% of the population live in European Russia. Russia's capital Moscow is one of the largest cities in the world; other major urban centers include Saint Petersburg, Novosibirsk, Yekaterinburg, Chelyabinsk, Nizhny Novgorod, Ufa and Kazan. Extending across the entirety of Northern Asia and much of Eastern Europe, Russia spans eleven time zones and incorporates a wide range of environments and landforms. From northwest to southeast, Russia shares land borders with Norway, Finland, Estonia, Latvia, Lithuania and Poland (both with Kaliningrad Oblast), Belarus, Ukraine, Georgia, Azerbaijan, Kazakhstan, China, Mongolia and North Korea. It shares maritime borders with Japan by the Sea of Okhotsk and the U.

The East Slavs emerged as a recognizable group in Europe between the 3rd and 8th centuries AD. Founded and ruled by a Varangian warrior elite and their descendants, the medieval state of Rus arose in the 9th century. In 988 it adopted Orthodox Christianity from the Byzantine Empire, beginning the synthesis of Byzantine and Slavic cultures that defined Russian culture for the next millennium. Rus' ultimately disintegrated into a number of smaller states; most of the Rus' lands were overrun by the Mongol invasion and became tributaries of the nomadic Golden Horde in the 13th century. The Grand Duchy of Moscow gradually reunified the surrounding Russian principalities, achieved independence from the Golden Horde, and came to dominate the cultural and political legacy of Kievan Rus'.

Following the Russian Revolution, the Russian Soviet Federative Socialist Republic became the largest and leading constituent of the Union of Soviet Socialist Republics, the world's first constitutionally socialist state. The Soviet Union played a decisive role in the Allied victory in World War II, and emerged as a recognized superpower and rival to the United States during the Cold War. The Soviet era saw some of the most significant technological achievements of the 20th century, including the world's first human-made satellite and the launching of the first humans in space. By the end of 1990, the Soviet Union had the world's second largest economy, largest standing military in the world and the largest stockpile of weapons of mass destruction. Following the dissolution of the Soviet Union in 1991, twelve independent republics emerged from the USSR: Russia, Ukraine, Belarus, Kazakhstan, Uzbekistan, Armenia, Azerbaijan, Georgia, Kyrgyzstan, Moldova, Tajikistan, Turkmenistan and the Baltic states regained independence: Estonia, Latvia, Lithuania; the Russian SFSR reconstituted itself as the Russian Federation and is recognized as the continuing legal personality and sole successor state of the Soviet Union.

Getting your order to you, quickly and securely is a top priority and is taken seriously here. Great care is taken in packaging and mailing every item securely and quickly. What is a certificate of authenticity and what guarantees do you give that the item is authentic?