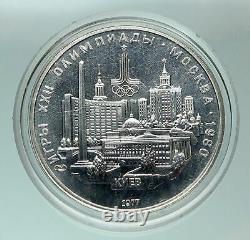 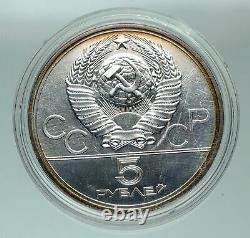 Item: i84844 Authentic Coin of. Union of Soviet Socialist Republics 1980 Summer Olympics in Moscow Commemorative 1977 Silver 5 Roubles 32mm (16.49 grams) 0.900 Silver 0.4793 oz. National coat of arms (hammer and sickle) in front of the globe underneath the soviet star and above the rising sun surrounded by barley ears bond with ribbons. Romanized: Kiyev is the capital and most populous city of Ukraine. It is in north-central Ukraine along the Dnieper River. Its population in July 2015 was 2,887,974 (though higher estimated numbers have been cited in the press), making Kiev the seventh-most populous city in Europe. Kiev is an important industrial, scientific, educational and cultural center of Eastern Europe. It is home to many high-tech industries, higher education institutions, and historical landmarks. The city has an extensive system of public transport and infrastructure, including the Kiev Metro.

The city's name is said to derive from the name of Kyi, one of its four legendary founders. During its history, Kiev, one of the oldest cities in Eastern Europe, passed through several stages of prominence and obscurity. The city probably existed as a commercial center as early as the 5th century. A Slavic settlement on the great trade route between Scandinavia and Constantinople, Kiev was a tributary of the Khazars.

Until its capture by the Varangians (Vikings) in the mid-9th century. Under Varangian rule, the city became a capital of the Kievan Rus', the first East Slavic state. Completely destroyed during the Mongol invasions in 1240, the city lost most of its influence for the centuries to come.

It was a provincial capital of marginal importance in the outskirts of the territories controlled by its powerful neighbours, first Lithuania, then Poland and Russia. The city prospered again during the Russian Empire's Industrial Revolution in the late 19th century. In 1918, after the Ukrainian National Republic declared independence from Soviet Russia, Kiev became its capital.

From 1921 onwards Kiev was a city of Soviet Ukraine, which was proclaimed by the Red Army, and, from 1934, Kiev was its capital. The city was almost completely ruined during World War II but quickly recovered in the postwar years, remaining the Soviet Union's third-largest city. Following the collapse of the Soviet Union and Ukrainian independence in 1991, Kiev remained Ukraine's capital and experienced a steady influx of ethnic Ukrainian migrants from other regions of the country.

During the country's transformation to a market economy and electoral democracy, Kiev has continued to be Ukraine's largest and wealthiest city. Its armament-dependent industrial output fell after the Soviet collapse, adversely affecting science and technology, but new sectors of the economy such as services and finance facilitated Kiev's growth in salaries and investment, as well as providing continuous funding for the development of housing and urban infrastructure. Kiev emerged as the most pro-Western region of Ukraine; parties advocating tighter integration with the European Union dominate during elections. The 1980 Summer Olympics, officially known as the Games of the XXII Olympiad Russian:? Igry XXII Olimpiady , was an international multi-sport event held in Moscow, Soviet Union, in present-day Russia.

Some athletes from some of the boycotting countries (they are not included in the list of 66 countries that boycotted the games entirely) participated in the games under the Olympic Flag. This prompted the Soviet-led boycott of the 1984 Summer Olympics. The Union of Soviet Socialist Republics USSR, Russian:???? Soyuz Sovetskikh Sotsialisticheskikh Respublik, abbreviated???? SSSR , also known as the Soviet Union?????????

, was a constitutionally socialist state that existed on the territory of most of the former Russian Empire in Eurasia between 1922 and 1991. The Soviet Union had a single-party political system dominated by the Communist Party. Nominally a union of Soviet republics, of which there were 15 after 1956, with the capital in Moscow, de facto the Soviet Union was a highly centralized state with a planned economy.

The security agency KGB actively oversaw much of the Soviet society. The union was founded in December 1922, when the Russian SFSR, which formed during the Russian Revolution of 1917 and emerged victorious in the ensuing Russian Civil War, unified with the Transcaucasian, Ukrainian and Belorussian SSRs. After the death of Vladimir Lenin, the first Soviet leader, power was eventually consolidated by Joseph Stalin, who led the country through a large-scale industrialization with command economy and political repression. During World War II, in June 1941, the Soviet Union was attacked by Germany, a country it had signed a non-aggression pact with. After four years of warfare, the Soviet Union emerged as one of the world's two superpowers, extending its influence into much of Eastern Europe and beyond. The Cold War, a global ideological and political struggle between the Soviet Union and its satellites from the Eastern Bloc on the one side and the United States and its allies on the other side, which the Soviet bloc, hit by economic standstill, ultimately lost, marked the post-war period. In the late 1980s the last Soviet leader Mikhail Gorbachev tried to reform the state with his policies of perestroika and glasnost, but the Soviet Union ultimately collapsed and was formally dissolved in December 1991 after the abortive August coup attempt.

Since then the Russian Federation is exercising its rights and fulfilling its obligations. Rossiya , also officially known as the Russian Federation Russian:?????????? Rossiyskaya Federatsiya , is a country in Eurasia. At 17,125,200 square kilometres (6,612,100 sq mi), Russia is the largest country in the world by surface area, covering more than one-eighth of the Earth's inhabited land area, and the ninth most populous, with over 144 million people at the end of March 2016. The European western part of the country is much more populated and urbanised than the eastern; about 77% of the population live in European Russia.

Russia's capital Moscow is one of the largest cities in the world; other major urban centers include Saint Petersburg, Novosibirsk, Yekaterinburg, Chelyabinsk, Nizhny Novgorod, Ufa and Kazan. Extending across the entirety of Northern Asia and much of Eastern Europe, Russia spans eleven time zones and incorporates a wide range of environments and landforms. From northwest to southeast, Russia shares land borders with Norway, Finland, Estonia, Latvia, Lithuania and Poland (both with Kaliningrad Oblast), Belarus, Ukraine, Georgia, Azerbaijan, Kazakhstan, China, Mongolia and North Korea. It shares maritime borders with Japan by the Sea of Okhotsk and the U. The East Slavs emerged as a recognizable group in Europe between the 3rd and 8th centuries AD. Founded and ruled by a Varangian warrior elite and their descendants, the medieval state of Rus arose in the 9th century.

The Soviet era saw some of the most significant technological achievements of the 20th century, including the world's first human-made satellite and the launching of the first humans in space. By the end of 1990, the Soviet Union had the world's second largest economy, largest standing military in the world and the largest stockpile of weapons of mass destruction. Following the dissolution of the Soviet Union in 1991, twelve independent republics emerged from the USSR: Russia, Ukraine, Belarus, Kazakhstan, Uzbekistan, Armenia, Azerbaijan, Georgia, Kyrgyzstan, Moldova, Tajikistan, Turkmenistan and the Baltic states regained independence: Estonia, Latvia, Lithuania; the Russian SFSR reconstituted itself as the Russian Federation and is recognized as the continuing legal personality and sole successor state of the Soviet Union. [30] It is governed as a federal semi-presidential republic.

The Russian economy ranks as the twelfth largest by nominal GDP and sixth largest by purchasing power parity in 2015. Russia's extensive mineral and energy resources are the largest such reserves in the world, making it one of the leading producers of oil and natural gas globally. The country is one of the five recognized nuclear weapons states and possesses the largest stockpile of weapons of mass destruction. Russia is a great power as well as a regional power and has been characterised as a potential superpower. It is permanent member of the United Nations Security Council, as well as a member of the G20, the Council of Europe, the Asia-Pacific Economic Cooperation (APEC), the Shanghai Cooperation Organisation (SCO), the Organization for Security and Co-operation in Europe (OSCE), and the World Trade Organization (WTO), as well as being the leading member of the Commonwealth of Independent States (CIS), the Collective Security Treaty Organization (CSTO) and one of the five members of the Eurasian Economic Union (EEU), along with Armenia, Belarus, Kazakhstan and Kyrgyzstan.

Great care is taken in packaging and mailing every item securely and quickly. What is a certificate of authenticity and what guarantees do you give that the item is authentic? You will be very happy with what you get with the COA; a professional presentation of the coin, with all of the relevant information and a picture of the coin you saw in the listing. Additionally, the coin is inside it's own protective coin flip (holder), with a 2x2 inch description of the coin matching the individual number on the COA. Whether your goal is to collect or give the item as a gift, coins presented like this could be more prized and valued higher than items that were not given such care and attention to.

When should I leave feedback? Please don't leave any negative feedbacks, as it happens sometimes that people rush to leave feedback before letting sufficient time for their order to arrive. The matter of fact is that any issues can be resolved, as reputation is most important to me. My goal is to provide superior products and quality of service.

How and where do I learn more about collecting ancient coins? Visit the Guide on How to Use My Store. For on an overview about using my store, with additional information and links to all other parts of my store which may include educational information on topics you are looking for. This item is in the category "Coins & Paper Money\Coins: World\Europe\Russia\USSR (1917-91)". The seller is "highrating_lowprice" and is located in this country: US.