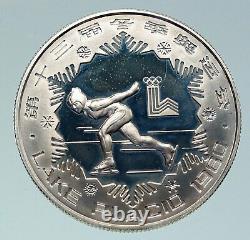 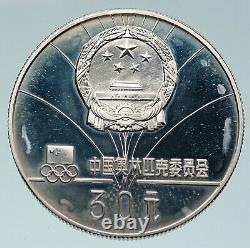 Item: i86492 Authentic Coin of. People's Republic 1980 Winter Olympics at Lake Placid 1980 Proof Silver 30 Yuan 32mm (15.05 grams) 0.850 Silver 0.4099 oz. ASW Reference: KM# 26, Y# 21 30, National emblem. 1980, Woman speed skater, within snowflake. The 1980 Winter Olympics , officially known as the XIII Olympic Winter Games , was a multi-sport event which was celebrated from February 13 to February 24, 1980, in Lake Placid, New York, United States. This was the second time the Upstate New York village hosted the Games, after 1932. The mascot of the Games was "Roni", a raccoon. The mask-like rings on a raccoon's face recall the goggles and hats worn by many athletes in winter sports. The sports were played at the Olympic Center, Whiteface Mountain, Mt.

The United States team's 4-3 win over the veteran and professional Soviet team, which came into the 1980 Games having won four consecutive Olympic gold medals, became known as the "Miracle on Ice" in US culture. The win captured the hearts of Americans, even though it was the win against Finland that secured the gold medal. Eric Heiden of the United States won gold in the 500m, 1000m, 1500m, 5000m, and 10,000m speed skating events, setting four Olympic records and one world record (10,000m) in the process and delivering 83% of the American gold medals (the only other gold, as noted above, was won by the hockey team). Heiden became the first person to win all five speed skating events, the first of only three to win five gold medals in individual events at a single Games (either Summer or Winter), and is still the only athlete to win five gold medals at one Winter Games. Sweden's Ingemar Stenmark won both the giant slalom and the slalom.

Hanni Wenzel won the women's giant slalom and slalom, making Liechtenstein the smallest country to produce an Olympic champion. Ulrich Wehling of East Germany and Irina Rodnina of the USSR won their respective events for the third time, Wehling in Nordic combined and Rodnina in pairs figure skating. Aleksandr Tikhonov of the USSR earned his fourth straight gold medal as part of the 4 x 7.5 km biathlon relay team.

Nikolay Zimyatov of the USSR earned three gold medals in cross-country skiing. Robin Cousins won gold for Great Britain in the men's singles figure skating. East Germany won the most medals overall (23) but had fewer golds (9) than the USSR (10). In possibly the most dramatic duel of the games, Sweden's Thomas Wassberg edged Finland's Juha Mieto in the 15 km cross-country skiing by 0.01 seconds, the closest margin of victory ever in Olympic cross-country skiing.

Although they did not get any medals, the People's Republic of China entered the Olympic Games for the first time after the IOC agreed to designate the Republic of China "Chinese Taipei". Lake Placid 1980 marked the first use of artificial snow in Olympic competition. Lake Placid 1980 was the last Olympics to be opened by the Vice President of the United States, as 1980 was a Presidential election year. China , officially the People's Republic of China (PRC) since 1949, is a country in East Asia and the world's most populous country, with a population of around 1.404 billion. Covering approximately 9,600,000 square kilometers (3,700,000 sq mi), it is the third- or fourth-largest country by total area, depending on the source consulted.

Governed by the Communist Party of China, the state exercises jurisdiction over 22 provinces, five autonomous regions, four direct-controlled municipalities (Beijing, Tianjin, Shanghai, and Chongqing), and the special administrative regions of Hong Kong and Macau. China emerged as one of the world's earliest civilizations, in the fertile basin of the Yellow River in the North China Plain. For millennia, China's political system was based on hereditary monarchies, or dynasties, beginning with the semi-legendary Xia dynasty in 21st century BCE. Since then, China has expanded, fractured, and re-unified numerous times. In the 3rd century BCE, the Qin unified core China and established the first Chinese empire.

The succeeding Han dynasty, which ruled from 206 BC until 220 AD, saw some of the most advanced technology at that time, including papermaking and the compass, along with agricultural and medical improvements. Tang culture spread widely in Asia, as the new maritime Silk Route brought traders to as far as Mesopotamia and Horn of Africa. Dynastic rule ended in 1912 with the Xinhai Revolution, when a republic replaced the Qing dynasty. The Chinese Civil War resulted in a division of territory in 1949, when the Communist Party of China established the People's Republic of China, a unitary one-party sovereign state on Mainland China, while the Kuomintang-led government retreated to the island of Taiwan.

The political status of Taiwan remains disputed. Since the introduction of economic reforms in 1978, China's economy has been one of the world's fastest-growing with annual growth rates consistently above 6 percent. As of 2016, it is the world's second-largest economy by nominal GDP and largest by purchasing power parity (PPP).

China is also the world's largest exporter and second-largest importer of goods. China is a recognized nuclear weapons state and has the world's largest standing army and second-largest defense budget. The PRC is a permanent member of the United Nations Security Council as it replaced the ROC in 1971, as well as an active global partner of ASEAN Plus mechanism. China is also a leading member of numerous formal and informal multilateral organizations, including the Shanghai Cooperation Organization (SCO), WTO, APEC, BRICS, the BCIM, and the G20. China is a great power and a major regional power within Asia, and has been characterized as a potential superpower. World-renowned expert numismatist, enthusiast, author and dealer in authentic ancient Greek, ancient Roman, ancient Byzantine, world coins & more. Ilya Zlobin is an independent individual who has a passion for coin collecting, research and understanding the importance of the historical context and significance all coins and objects represent.

What is a certificate of authenticity and what guarantees do you give that the item is authentic? You will be very happy with what you get with the COA; a professional presentation of the coin, with all of the relevant information and a picture of the coin you saw in the listing. Additionally, the coin is inside it's own protective coin flip (holder), with a 2x2 inch description of the coin matching the individual number on the COA. Whether your goal is to collect or give the item as a gift, coins presented like this could be more prized and valued higher than items that were not given such care and attention to. When should I leave feedback? Please don't leave any negative feedbacks, as it happens sometimes that people rush to leave feedback before letting sufficient time for their order to arrive. The matter of fact is that any issues can be resolved, as reputation is most important to me. My goal is to provide superior products and quality of service. How and where do I learn more about collecting ancient coins? Visit the Guide on How to Use My Store. For on an overview about using my store, with additional information and links to all other parts of my store which may include educational information on topics you are looking for. The item "1980 CHINA Moscow Russia Olympics SPEED SKATING Proof Silver 30 Yuan Coin i86492" is in sale since Tuesday, October 6, 2020. This item is in the category "Coins & Paper Money\Coins\ World\Asia\China\PRC (1949-Now)". The seller is "highrating_lowprice" and is located in Rego Park, New York. This item can be shipped worldwide.