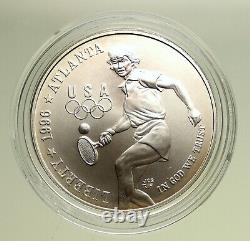 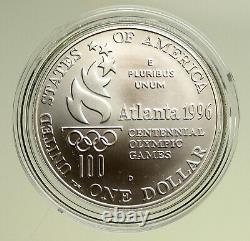 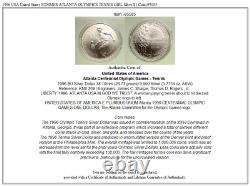 UNITED STATES OF AMERICA E PLURIBUS UNUM Atlanta 1996 CENTENNIAL OLYMPIC GAMES ONE DOLLAR, The Atlanta Committee for the Olympic Games logo. Coin Notes: The 1996 Olympic Tennis Silver Dollar was issued in commemoration of the XXVI Olympiad in Atlanta, Georgia. It was part of an extensive program, which included a total of sixteen different coins struck in clad, silver, and gold, and released over the course of two years. The 1996 Tennis Silver Dollar was produced in uncirculated version at the Denver Mint and proof version at the Philadelphia Mint. The overall mintage was limited to 1,000,000 coins, which was an increase from the level set for the prior year's Olympic Silver Dollars.

The low mintages for this coin now drive significant premiums, particularly for the uncirculated version. The 1996 Summer Olympics, officially known as the Games of the XXVI Olympiad, commonly known as Atlanta 1996, and also referred to as the Centennial Olympic Games, were an international multi-sport event that was held from July 19 to August 4, 1996, in Atlanta, Georgia. These Games, which were the fourth Summer Olympics to be hosted by the United States, marked the centennial of the 1896 Summer Olympics in Athens-the inaugural edition of the modern Olympic Games. They were also the first since 1924 to be held in a different year from a Winter Olympics, under a new IOC practice implemented in 1994 to hold the Summer and Winter Games in alternating, even-numbered years. More than 10,000 athletes from 197 National Olympic Committees competed in 26 sports, including the Olympic debuts of beach volleyball, mountain biking, and softball, as well as the new disciplines of lightweight rowing and women's football (soccer).

Notable performances during competition included those of Andre Agassi-who became the first men's singles tennis player to combine a career Grand Slam with an Olympic gold medal, Donovan Bailey-who set a new world record of 9.84 for the men's 100 metres, and Lilia Podkopayeva-who became the second gymnast to win an individual event gold after winning the all-round title in the same Olympics. The festivities were marred by violence on July 27, when Eric Rudolph detonated pipe bombs at Centennial Olympic Park-a downtown park that was built to serve as a public focal point for the Games' festivities, killing 2 and injuring 111.

In 2003, Rudolph confessed to the bombing and a series of related attacks on abortion centers and a gay bar, and was sentenced to life in prison. He claimed that the bombing was meant to protest the U.

Government's sanctioning of "abortion on demand". The Games turned a profit, helped by record revenue from sponsorship deals and broadcast rights, and reliance on private funding (as opposed to the extensive public funding used on later Olympics), among other factors.

The Games faced criticism for being overly commercialized, as well as other issues noted by European officials, such as the availability of food and transport. The event had a lasting impact on the city; Centennial Olympic Park led a revitalization of Atlanta's downtown area and has served as a symbol of the Games' legacy, the Olympic Village buildings have since been used as residence housing for area universities, and the Centennial Olympic Stadium has been re-developed twice since the Games-first as the baseball park Turner Field, and then as the college football venue Center Parc Stadium. The United States of America (USA), commonly known as the United States U.

With a population of over 327 million people, the U. Is the third most populous country. The capital is Washington, D.

And the largest city by population is New York. Forty-eight states and the capital's federal district are contiguous in North America between Canada and Mexico. Territories are scattered about the Pacific Ocean and the Caribbean Sea, stretching across nine official time zones.

The extremely diverse geography, climate, and wildlife of the United States make it one of the world's 17 megadiverse countries. Paleo-Indians migrated from Siberia to the North American mainland at least 12,000 years ago. European colonization began in the 16th century. The United States emerged from the thirteen British colonies established along the East Coast.

Numerous disputes between Great Britain and the colonies following the French and Indian War led to the American Revolution, which began in 1775, and the subsequent Declaration of Independence in 1776. The war ended in 1783 with the United States becoming the first country to gain independence from a European power. The current constitution was adopted in 1788, with the first ten amendments, collectively named the Bill of Rights, being ratified in 1791 to guarantee many fundamental civil liberties.

The United States embarked on a vigorous expansion across North America throughout the 19th century, acquiring new territories, displacing Native American tribes, and gradually admitting new states until it spanned the continent by 1848. During the second half of the 19th century, the Civil War led to the abolition of slavery. By the end of the century, the United States had extended into the Pacific Ocean, and its economy, driven in large part by the Industrial Revolution, began to soar. The Spanish-American War and World War I confirmed the country's status as a global military power. The United States emerged from World War II as a global superpower, the first country to develop nuclear weapons, the only country to use them in warfare, and a permanent member of the United Nations Security Council.

It is a federal republic and a representative democracy, "in which majority rule is tempered by minority rights protected by law". The United States is a founding member of the United Nations, World Bank, International Monetary Fund, Organization of American States (OAS), and other international organizations. The United States is a highly developed country, with the world's largest economy by nominal GDP and second-largest economy by PPP, accounting for approximately a quarter of global GDP.

Economy is largely post-industrial, characterized by the dominance of services and knowledge-based activities, although the manufacturing sector remains the second-largest in the world. The United States is the world's largest importer and the second largest exporter of goods, by value. Although its population is only 4.3% of the world total, the U.

Holds 33% of the total wealth in the world, the largest share of global wealth concentrated in a single country. It also suffers from growing levels of income inequality and wealth inequality. The United States ranks among the highest nations in several measures of socioeconomic performance, including human development, per capita GDP, and productivity per person. The United States is the foremost military power in the world, making up a third of global military spending, and is a leading political, cultural, and scientific force internationally. World-renowned expert numismatist, enthusiast, author and dealer in authentic ancient Greek, ancient Roman, ancient Byzantine, world coins & more.

You will be very happy with what you get with the COA; a professional presentation of the coin, with all of the relevant information and a picture of the coin you saw in the listing. Additionally, the coin is inside it's own protective coin flip (holder), with a 2x2 inch description of the coin matching the individual number on the COA. Whether your goal is to collect or give the item as a gift, coins presented like this could be more prized and valued higher than items that were not given such care and attention to. When should I leave feedback? Please don't leave any negative feedbacks, as it happens sometimes that people rush to leave feedback before letting sufficient time for their order to arrive. The matter of fact is that any issues can be resolved, as reputation is most important to me. My goal is to provide superior products and quality of service. How and where do I learn more about collecting ancient coins? Visit the Guide on How to Use My Store.

For on an overview about using my store, with additional information and links to all other parts of my store which may include educational information on topics you are looking for. This item is in the category "Coins & Paper Money\Coins: US\Commemorative\Modern Silver/Clad (1982-Now)".