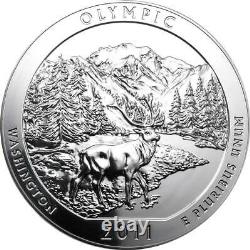 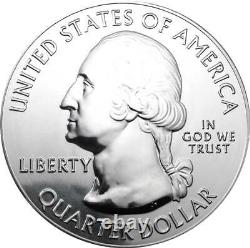 Mintage of just 104,900 coins. Obverse: Similar to the Washington quarter featuring the text United States of America, Liberty, In God We Trust, and Quarter Dollar. Reverse: Image of an elk in front of Mount Olympus, surrounded by "Olympic, " "Washington, " "E Pluribus Unum" and the date. Rim is engraved with weight and purity of the coin.

This popular and high collectible 5 oz America the Beautiful Silver Bullion Coin have captured the imagination of investors and collectors. Add this coin to your collection!

Olympic National Park is a 922,000 acre park featuring snow-covered mountains, lush rainforests and the dramatic Pacific coastline. President Grover Cleveland designated the Olympic Peninsula's forests as the Olympic Forest Reserve in 1897, forever preserving its serenity and majestic beauty in history. Ultimately, in 1938, President Franklin Roosevelt signed the act establishing Olympic National Park. America The Beautiful 5 oz Coin Series (2010 2021). In 2010, the United States Mint launched the America The Beautiful Quarter series, the mints first-ever 5 ounce coin and their largest Silver bullion coin to-date. The new quarter series includes a total of 56 quarter-dollar coins, each with a design of a National Park or National Site from one of the 50 states, five U. The obverse design of each 5 oz Silver America The Beautiful coin duplicates the design of the America the Beautiful clad quarters used in circulation, except in greater detail. The mint makes two versions of the America the Beautiful 5 oz Silver coin: a Bullion version with a shiny prooflike finish made for investors and an Uncirculated, or Burnished, version with a matte-like finish made for collectors.

The Burnished version features the "P" mintmark for the Philadelphia Mint and includes a U. Mint box and certificate of authenticity.

The Bullion version does not have a mintmark and comes in a plastic capsule with no certificate of authenticity. The Bullion versions have higher mintages and are available to the public only through authorized bullion dealers like BitcoUSA, while the Uncirculated versions have much lower mintages and are available through the U. Mint directly, as well as retailers like BitcoUSA. All America The Beautiful 5 oz Silver coins have the same obverse of George Washington.

This item is in the category "Coins & Paper Money\Coins\ US\Commemorative\Mixed Lots". The seller is "bitcousa" and is located in Burbank, California. This item can be shipped to United States.